Getting to know our electrophysiologist

June 07, 2022
Bayside Specialist Suites is home to one of Melbourne’s leading electrophysiologists, Associate Professor Sandeep Prabhu. An electrophysiologist is a cardiologist who specialises in the management of heart rhythm disorders or arrhythmias – a kind of ‘electrician’ of the heart.

people of their heart conditions – while his research has been internationally recognised.

Here, Associate Professor Prabhu elaborates on his research, his work and what drives him.

How did you get into electrophysiology?

From there, some cardiologists choose to specialise in intervention (which is basically the plumbing stuff), while others do imaging or non-invasive cardiology.

A small group of people, usually the nerdier ones, do electrophysiology. It’s sort of like learning a whole new language, so it often deters many from going down this path.

I did electrophysiology through a combined world renowned clinical and research program run across the Alfred and Royal Melbourne, in conjunction with the Baker Heart and Diabetes Institute. You do a PHD and a lot of procedures – ablation procedures and pacemaker implants and things.

What was your PhD?

The main focus of my PhD was in a specific area called atrial fibrillation, or AF, which is one of the most common heart disorders. It’s a condition which makes the heart go very fast and irregular. It’s associated with stroke along with several other heart problems.

The focus of the research was a clinical trial (called CAMERA-MRI), which we completed in 2017. We performed procedures, called catheter ablation, on patients who had AF and quite severe heart disfunction or failure, where the heart doesn’t beat very strongly.

We found that by fixing their atrial fibrillation, in quite a lot of patients we saw their heart function return to the normal range.

What were the implications of your research? 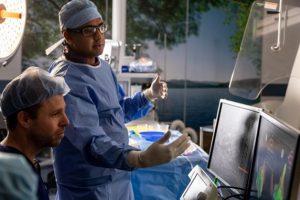 The study was something we are immensely proud of. By logistics, you can only treat so many patients, but when you publish your research internationally, you can take your findings and help thousands of patients worldwide. Therein lies the true value of clinical research.

It was a team effort with a whole lot of collaborators across Melbourne. We’re so lucky to have some of the greatest physicians in this field in Melbourne.

The study was also nominated for the Victorian Premier’s Award in 2019 and we won a few awards for our research. Since then, the paper has been sited hundreds of times, which is great because it means people are taking notice of our research.

We are now running a follow-up trial – a bigger version of the trial, looking at all forms of heart failure, and are hoping to finish this in 2023-24.

After finishing my PhD in 2017, I headed to London to do some additional training at St Bartholomew’s Hospital a leading centre for heart rhythm disorders management in Europe. I trained with Professor Richard Schilling, a world leader in the field and a true pioneer in catheter ablation for rhythm disorders.

In 2019, I returned to Melbourne and started as a consultant at the Alfred Hospital and built up a private practice based around the Bayside and south east Melbourne regions. We have our private practice called Bayside Heart, consulting at Bayside Specialist Suites.

I feel it is very important to be able to manage both public and private patients, so, for that reason I established the Sandringham Arrhythmia Clinic, a public clinic run out of the Sandringham Hospital, in February 2020.

In addition to the Alfred, I also work privately at Mulgrave Private, the Epworth Hospital (Richmond), Melbourne Private and Peninsula Private Hospital.

What do you love about your work?

A lot of patients probably don’t realise that many of their heart rhythm conditions can be treated, sometimes even cured completely, with a single, straightforward, low-risk procedure.

We sometimes see patients who have struggled with their arrhythmia condition for many years or have been on long-term tablets. In some instances, we can perform a minimally invasive day procedure and they’re pretty much cured. It’s one of the really nice things about our field.

Being able to tell patients they don’t have a heart condition any longer is one of my favourite parts of the job.

Where to from here?

Our field is one that is really growing. Electrophysiology used to be a ‘boutique’ operation done in a few places and with most people unaware of what treatments were available.

What I’d like to see at the GP and community level is for people to be aware of what an electrophysiologist can offer to those with heart rhythms disorders. When patients are referred to us earlier, the outcomes are usually better. My aim would be to improve the education and knowledge of our field in the community.